Do we really need a new internet ? Maybe not. Especially we don’t feel the need of one, currently. But did the generation before us ever felt the need of internet in the first place. If you delve into the past and asked any normal person living in late 70’s or early 80’s “If they feel the need of the structure consisting web of hyper-linked connected texts(internet)?”. The answer would be a “Big No”. That is the reason internet was not a instant hit when it came out, It took some years for it to become fairly successful among common non-techy people.

Now we can clearly see why we needed the advent of internet in first place. Just look at people now enjoying the string of luxuries which they didn’t even know two decades ago would and could exist. Now, we can feed a particular destination into the self driving cars , it can find the directions itself and also will take best route to reach that place with help of GPS. If we don’t have the time to go for shopping and want to buy clothes for friend’s wedding, We can order them on E-commerce websites like E-bay. We can Access movies and tv shows online on sites like Netflix and amazon prime video. We can showcase our talent on the websites like Youtube. We can video chat our far living friends on skype. As Elon musk said “We’re already a cyborg, We have a digital version of ourself, a partial version of ourself online in the form of our emails, our social media, and all the things that we do. We already have small super powers”. We have extensions of ourselves living virtually with us in the form Apps we use in our smart phones.

So the basic point is that we don’t have to feel the need of some luxuries for the innovation to take place . Innovation will provide us with the luxuries that we never even in our wildest dreams ever felt the need of. Maybe a virtual reality devices in future will be giving us simulation of houses that we are interested in. So that we can live in simulation for some duration to decide more clearly whether we should buy it or not. We don’t need to feel the need of new version of internet but it might give us some of the most important luxuries in Future. 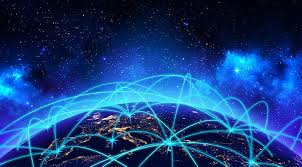 Currently , we are on the verge of new Revolution that is A.I. Revolution . But, Is their a level playing field for such revolution ? Answer to that is “Big NO”. The Driving force for A.I. revolution will be “Data”. The More Data you have the smarter you’re A.I. will be. So is data free ? Of Course it is free for some organizations that we use and provide data to in return of their service . Organizations like Google, Amazon, Microsoft and Facebook collects billions of terabytes of data that their users provide them for free. All these Organizations are called as “Stacks”. Stacks have abundance of data and they are using it to feed their A.I.’s . And more data you have Smarter your A.I’s are. The amount of data these organizations have their A.I’s would not be simple A.I.’s they are going to be superior breed of A.I.’s called as super A.I’s . So there is no level playing field in the A.I. revolution. This will only expand the already huge financial gap to another extreme. As we know currently the wealth of only 3 percent people of earth equals the wealth of other 97 percent. So what can we do currently to counter this situation.

We need a new Internet .

Required attributes in the new internet !

There is this paper Titled “Interplanetary file System “ by Juan benet which proposed a system like this . 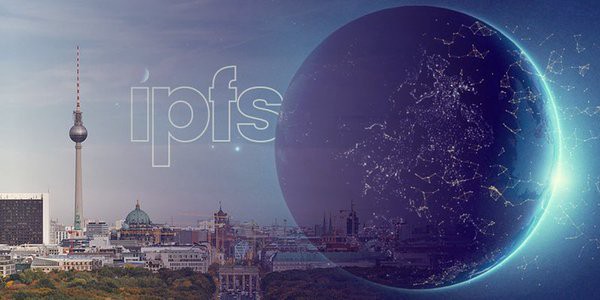 There have been many attempts at constructing a global distributed ﬁle system. For example :- Project Xanadu . Among the academic attempts, AFS has succeeded widely and is still in use today. Outside of academics, the most successful systems have been peer-to-peer ﬁle-sharing applications primarily geared toward large media (audio and video). Most notably, Napster, KaZaA, and BitTorrent deployed large ﬁle distribution systems supporting over 100 million simultaneous users. Even today, BitTorrent maintains a massive deployment where tens of millions of nodes churn daily . These applications saw greater numbers of users and ﬁles distributed than their academic ﬁle system counterparts. However, the applications were not designed as infrastructure to be built upon. While there have been successful repurposings1, no general ﬁle-system has emerged that oﬀers global, low-latency, and decentralized distribution. Perhaps this is because a “good enough” system for most use cases already exists: HTTP. By far, HTTP is the most successful “distributed system of ﬁles” ever deployed. Coupled with the browser, HTTP has had enormous technical and social impact. It has become the de facto way to transmit ﬁles across the internet. Yet, it fails to take advantage of dozens of brilliant ﬁle distribution techniques invented in the last ﬁfteen years. From one prespective, evolving Web infrastructure is near-impossible, given the number of backwards compatibility constraints and the number of strong parties invested in the current model. But from another perspective, new protocols have emerged and gained wide use since the emergence of HTTP. What is lacking is upgrading design: enhancing the current HTTP web, and introducing new functionality without degrading user experience. Industry has gotten away with using HTTP this long because moving small ﬁles around is relatively cheap, even for small organizations with lots of traﬃc. But we are entering a new era of data distribution with new challenges:

(a) Hosting and distributing petabyte datasets,

(b) Computing on large data across organizations,

Many of these can be boiled down to “lots of data, accessible everywhere.”

Git, the distributed source code version control system, developed many useful ways to model and implement distributed data operations. The Git toolchain oﬀers versatile versioning functionality that large ﬁle distribution systems severely lack. New solutions inspired by Git are emerging, such as Camlistore, a personal ﬁle storage system, and Dat [a data collaboration toolchain and dataset package manager. Git has already inﬂuenced distributed ﬁlesystem design , as its content addressed Merkle DAG data model enables powerful ﬁle distribution strategies. What remains to be explored is how this data structure can inﬂuence the design of high-throughput oriented ﬁle systems, and how it might upgrade the Web itself.

The InterPlanetary File System (IPFS) is a peer-to-peer distributed ﬁle system that seeks to connect all computing devices with the same system of ﬁles. In some ways, IPFS is similar to the Web, but IPFS could be seen as a single BitTorrent swarm, exchanging objects within one Git repository. In other words, IPFS provides a high throughput content-addressed block storage model, with content-addressed hyper links. This forms a generalized Merkle DAG, a data structure upon which one can build versioned ﬁle systems, blockchains, and even a Permanent Web. IPFS combines a distributed hash table(DHT), an incentivized block exchange, and a self-certifying namespace. IPFS has no single point of failure, and nodes do not need to trust each other.

Aim :- To help us move towards a permanent decentralized web. 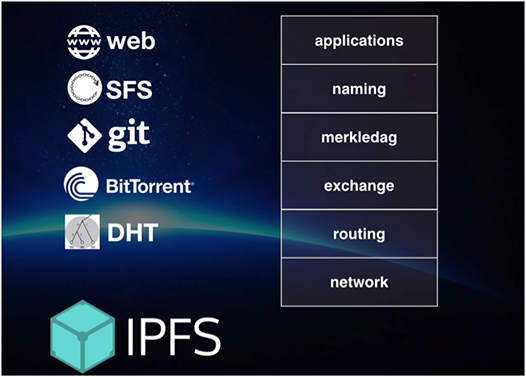 Kademlia DHT is a popular DHT that provides:

Coral DSHT While some peer-to-peer ﬁlesystems store data blocks directly in DHTs, this“wastes storage and bandwidth, as data must be stored at nodes where it is not needed” . The Coral DSHT extends Kademlia in three particularly important ways:

The IPFS Protocol is divided into a stack of sub-protocols responsible for diﬀerent functionality: 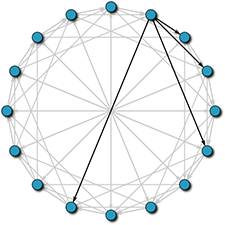 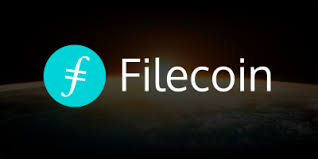 IPFS is designed to be used in a number of diﬀerent ways.

There are other notable contenders in the space, as well. 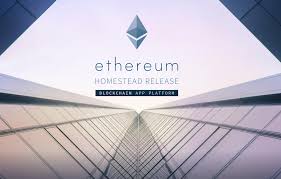 Ethereum is working to build a general-purpose (Turing-complete) blockchain computing language, including decentralized storage. As of this writing (2016), their efforts are focused on securing the DAO (in their usage, “Democratic Autonomous Organization”) and storage has been put on the back burner. 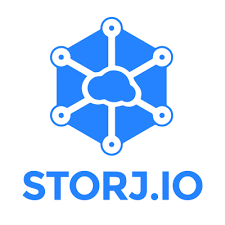 StorJ has garnered a lot of hype lately; it has pre-mined a lot of StorJcoins and has made some pretty designs. The designs are neat—it won an Austin hackathon—and the group seems to know what it’s talking about. Despite all of this,         more than a year post-hackathon it is still vaporware.

Maidsafe, like Ethereum, is trying to do many things. They aren’t using proof-of-work and aim to create a decentralized platform for computing, storage, and currency. They’ve been working on their platform for six years and it seems like the project hasn’t gained that much traction.

So, IPFS takes the best ideas from Git, DHTs, SFS, BitTorrent, and Bitcoin and combines them to create a decentralized data-storage network. IPFS hopes to one day replace the HTTP:// protocol of the Web with IPFS://, but they can work in unison as well in several ways that we’ll get into when we begin talking about implementation.

IPFS is the most robust, thought-through solution to decentralized storage out of all the cryptocurrency projects.